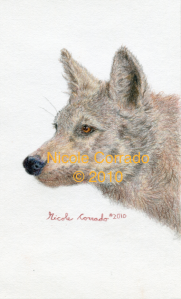 Wolves have not been treated kindly in movies.  Movies usually depict wolves as a dangerous foe to be defeated.  Even family oriented films are not immune to the classic big-bad world stereotype.

I have always been bothered by the dangerous wolf stereotype, and for this reason, I am reluctant to see Frozen, after seeing the wolf chase in the trailer.  Wolves, in reality, pose little threat to humans.

Wolves are naturally shy creatures who prefer to avoid humans.  Despite this fact, wolf stereotypes still abound in movies and some books.  While there is no room for stereotypes in entertainment, children will enviably encounter them during their life.  A movie like Frozen can be used as an opportunity to discuss stereotypes with children, allowing them to recognize stereotypes when they encounter them.  Visiting the non-fiction section at the library, and checking out educational websites are great way to learn more about wolves.  Last month, I had written a list of recommended children’s books on wolves, which can be found here.

Today is Remembrance Day.  As someone fascinated with animals, I would like to recommend two books that I have recently read.

The first, Duke (Kirby Larson, Scholastic Press, 2013, http://www.scholastic.com Jacket art by Blake Morrow), tells the story of one boy’s difficult decision to enrol his dog in Dogs for Defence.  Hobie Hanson loves his dog, Duke.  He hears about Dogs for Defence, but doesn’t want to give his dog away to the army.  But Hobie’s father is in the army, and Hobie feels pressured to enlist Duke, if it means brining his dad home sooner.  Hobie misses both dearly, and keeps writing letters inquiring about their safety.  Duke is a very believable story that introduces young and young at heart readers to the often forgotten role that family pets played in WWII.  Duke is a sweet yet realistic tale that animal lovers from children to seniors will enjoy.

A Man of His Own (Susan Wilson, St. Martin’s Press, 2013) features WWII’s K9 defence from both an adult and a dog perspective.  Rick Stanton, a young adult baseball player, has it good.  He recently married the lovely Francesca, and lives with Pax, their dog.  Rick and Francesca plan on expanding their family through children.  But WWII begins and Rick is drafted.  Pax is enlisted into the army too.  Pax is paired with a young soldier named Keller, who falls in love with the dog.

When Rick returns home he is injured.  Both Rick and Keller love Pax, so Francesca, atelier, and Rick come up with a compromise.  Keller will be Rick’s aid.  But this live-in arrangement causes a possible love triangle between Keller, Francesca, and Rick.  Rick, meanwhile, aid dangerously depressed, and Pax may be the only one who can save both Rick’s marriage and even his life.

One thing I liked about A Man of His Own is how it alternates between viewpoints, including Pax’s viewpoint and thoughts.  Pax, as well as the human character, is very believable.

Due to the themes of life-threatening depression, as well as mild brief language, A Man of His Own is intended for adult readers.  However, this book is refreshingly clean, making it suitable for an audience (Like myself) that doesn’t want objectionable content.

For Remembrance Day, I thank all the human, dog, horse, and other animal soldiers and veterans for their loyal service.  I also thank all the service animals that help veterans heal from physical and/or mental injuries.