Earlier this month, the world lost Farley Mowat, great writer and animal activist.  Farley Mowat changed the world’s perspective on wolves with his groundbreaking memior Never Cry Wolf.  His unconventional research method of living (and eating) like a wolf while observing an Arctic wolf pack gave Farley Mowat a unique perspective.  Ootek, an Inuit man who befriended Farley Mowat, introduced him to a culture that respects and reveres wolves.  Never Cry Wolf was one of my favourite wolf books as a child, and it still holds up today.  (It is quite possible that Never Cry Wolf in part influenced Jean Craighead George’s Julie of the Wolves trilogy.)

Farley Mowat’s love of wildlife began in childhood, documented in his funny memoir Owls in the Family.  His concerns on animal welfare, first spoken in Never Cry Wolf, were passionately described in his anti-whaling books A Whale for the Killing, and Sea of Slaughter.  He was opposed to the exploitation of wildlife, either through commercial hunting, or the keeping of animals in roadside zoos and amusement parks.  Even in his later years, he spoke out animal welfare and environmental issues.

Just before Farley Mowat’s death, I e-mailed his assistant Alexandra at Furby House Books, thanking Farley Mowat for writing Never Cry Wolf.  She e-mailed back, saying that she printed out the e-mail and gave it to him.  I like to wonder about the smile it probably brought to his face as he read it.  May Farley Mowat’s legacy live on in the next generation who is now discovering his books. 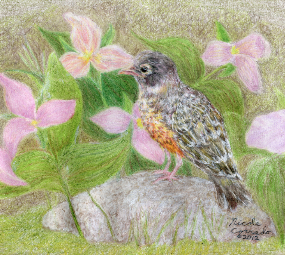